A couple things that are not cool. 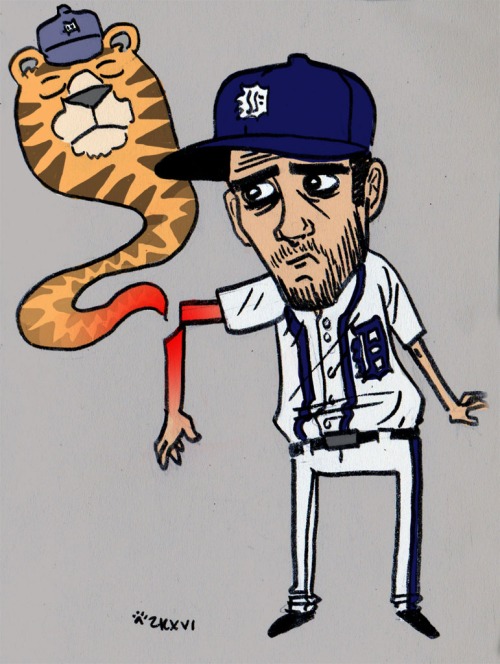 Not cool: JD Martinez breaking his elbow and being out six weeks. It’s not even like he broke it doing something irresponsible like skateboarding or jumping on a trampoline or carrying a bag of frozen meat up the stairs. No, he was just playing baseball and he played baseball a little too hard and there you have it, now the ghostly spirit of Tigers offense can waft right on up and out of that break. Not cool at all.

Also not cool: this situation. 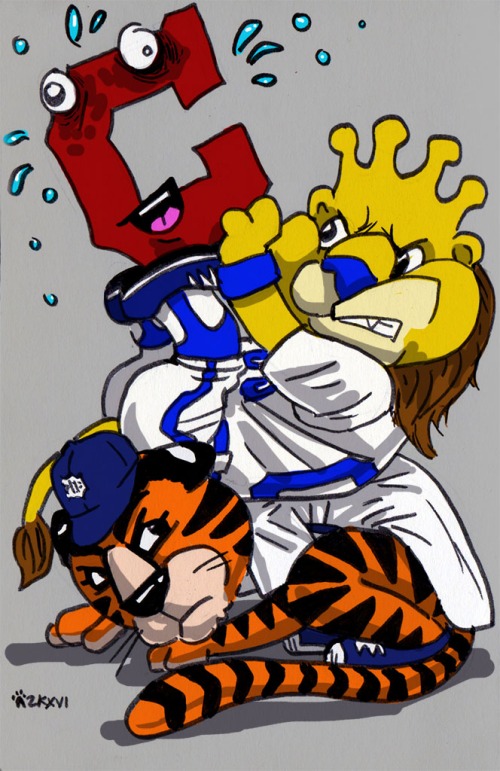 It’s time once again for everyone to learn a thing or two about Passover via Tigers cartoons: the best educational method the internet has ever devised.

As many of you know, ceremonial dinners called seders mark the first two nights of the Passover holiday. The centerpiece of a seder is the seder plate, which displays food items symbolic of various bits of the Passover tale (which is the ‘Moses leading the people out of slavery in Egypt story’).

The Paschal lamb or shankbone represents the sacrificial offering, which was traditionally a lamb. Alex Avila, as the most consistently beat-up Tiger, is very obviously our sacrificial lamb. We offer him up on the altar of home plate, hoping that the Baseball Gods will be appeased by the gift of his body.

The karpas is a green vegetable (often parsley) that is dipped in salt water. This represents the tears shed by the Jews while they were enslaved in Egypt, building pyramids for the Pharaohs and whatnot. As he will be starting the season on the DL, it is only appropriate that Justin Verlander is the karpas this year. His tears flow as freely as his triceps do not.

The maror or bitter herbs is just shredded horseradish (although horseradish is naturally white, at a seder you often see bright red maror, which has been mixed with beet juice). This represents the bitterness and harshness that the Jews suffered while they were enslaved. JD Martinez experienced great bitterness and suffering while in the Astros organization, before he was led through the Red Sea by Dave Dombrowski to the promised land of Detroit.

What is the deal with the egg? It is always included on the seder plate, but there are many conflicting stories about why it’s there. One story has the egg as an ancient symbol of fertility and rebirth (as the Jews come out of slavery and are reborn as a free people). One has the egg as a symbol of mourning, because all sorts of Jewish holy sites had been destroyed. One has the egg as another representation of the sacrificial offering, which is confusing because that’s also the shankbone, and those are from two different animals, so… it’s there because it’s a nice symbol for all sorts of things, I guess. This is Miguel Cabrera, certainly a fine symbol of the rebirth of the Tigers, and sometimes a sacrificial offering in the lineup, especially if he’s not adequately protected by a strong slugger batting behind him. He’s not really a symbol of mourning right now, and hopefully we will keep it that way.

The charoset is a mix of chopped up nuts and apples and spices, representing the mortar that the Jews had to use to build things for the Egyptians. Nick Castellanos, as the youngest member of the Tigers right now, is what we are going to build upon.

The matzah is usually next to the seder plate, not on it, but it is a vital part of any seder, and one of the most recognizable symbols of Passover for Jews and goys alike. When they were getting out of Egypt, the Jews had to leave ASAP, with very little warning. They had to grab bread right out of the ovens to take on the journey, so it didn’t have time to rise. That’s matzah. The fastest Tiger is Rajai Davis so… Matzah Davis.

Have a very Happy Passover, cats and kittens!

We are so close to Opening Day! Like, oh gosh, so close! But we still have time to sneak in a few more preseason predictions that are absolutely sure to come true due to the incredible insight that Roar of the Tigers has into the minds and bodies of the Detroit Tigers and their entire management team. That’s right Brad Ausmus, I’m reading your mind right now and I’m loving it.

–Dave Dombrowski will, like Miguel Cabrera, have a slow start to the season. But where Miguel’s slow start is at the plate, Mr. D’s slow start is on his torso. It will be way too cold in April, and possibly some of May, for short-sleeve striped polo shirts at the ballpark. But eventually the temperature will rise, and the second-most realistic tiger stripes* worn by a Detroit employee will once more be displayed before our adoring eyes.

(*obviously the most realistic stripes belong to Paws)

–Every single time Justin Verlander is injured, K*te Upt*n gains a year of life thanks to her dabbles in the black magicks of app wizardry.

–Joe Nathan is so old and so out of touch with the modern age that he begins pitching not forward, into the future, but straight down, through geologic time. It is as if his ancient bones are yearning to join their brethren beneath the soil. Dinosaurian remains beckon. He knows he belongs among them more than he has ever belonged here among us. If he cannot yet go among their ranks, he can at least send his pitches there.

–It doesn’t much matter, though, because by August MLB has pushed through the controversial First Name Enforcement (FNE) rule, banning all players with two first names from the league, on the basis of it making for confusing and annoying jersey name-on-back situations (which everyone knows are no good for merchandising). Joe Nathan, Alfredo Simon and Kyle Ryan are promptly banished to independent ball. There is lively argument for a while over the fate of Rajai Davis; at the end of the season his case is still being decided by the commissioner’s office.

–JD Martinez switches his name around, becomes involved in an intense DJing battle with the Rays’ DJ Kitty.

–In an unexpected bid to become the new Don Kelly, Andrew Romine starts teaching himself how to play catcher. He also begins to aggressively befriend Jim Leyland, leaving little gifts of cigarettes and Barbra Streisand CDs on his desk. Brad Ausmus is slightly hurt but will never let on.

(But I can tell, because I’m reading his mind.)

Now, this is kind of unrelated, BUT if you like baseball cards you may find it to your liking. An artist friend and I have been working together on this weird, goofy project for quite a long time, and we finally got it to the point where it’s ready to become real.

It’s called Art World Universe Series One, and it is a set of trading cards for a deranged world where contemporary artists are superheroes and supervillains and Legends (who transcend those former categories). 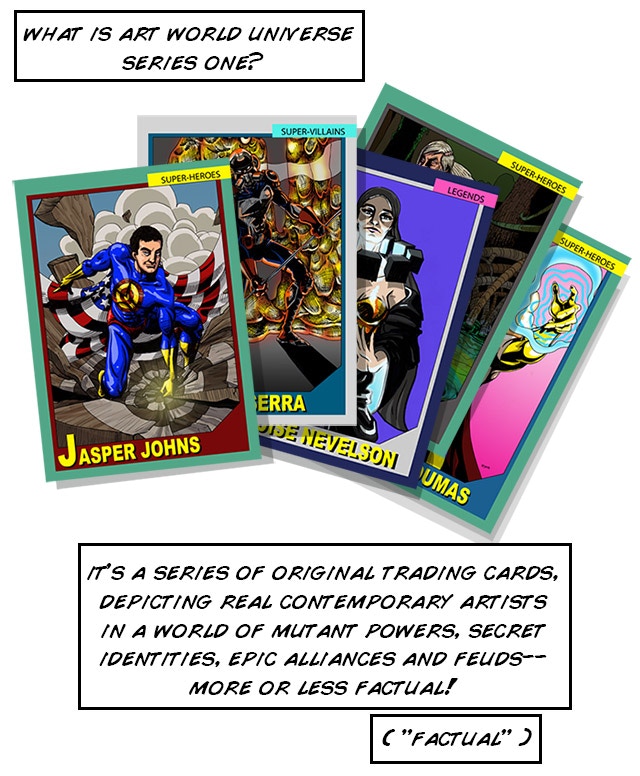 As I said, it is more about art and comic books than it is about baseball, but it is a set of trading cards and I did draw them all, so I figured I should let you guys know about the project. We have a Kickstarter where we are trying to make this dumb thing happen– take a look, read about the project, check out the cartoons, enjoy the video, and hey, if you happen to see a reward that you want, go ahead and grab one!